The sanctuary of St Peter's was rebuilt in 1974/5 following a fire that destroyed a 6-rank extension organ by John Compton dating from 1935.  The present organ was installed at that time by the Walsall-based firm of Hawkins to a specification drawn up by George Miles, who had been organist here for many years.

Much of the pipework (and the slider windchests) came from an organ by J J Binns that was originally built for the Wednesbury Road Congregational Church, Walsall.  The rest was new.  The case, designed by Anthony Chatwin, was made in Lichfield.

The detached oak console is located in the south aisle from where the organist looks across to the organ chamber on the north side of the chancel.  The latest cleaning and renovation was carried out by Peter Spencer in 1999, when solid state action to stops & pistons was added.

Your Webmaster has a particular association with at least part of this instrument, since he first began playing for church services (in his early teenage years!) on the original 3-manual Binns organ in Walsall, as may be seen in the photo on the right dating from 1967. 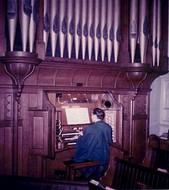 You can listen to an amazing performance (by Jonathan Scott) on the JJ Binns organ in Rochdale Town Hall (centenary next year), for Aug 12's Music of the Month