By the time you read this, Dame Gillian Weir will have given her last public recital, and Birmingham was included on her final recital tour.  The Symphony Hall audience gave a warm welcome to this doyenne of organists on the evening of 19th November; but the following morning, Dame Gillian had agreed to give a masterclass in Symphony Hall to organ students of Birmingham Conservatoire – who also all happened to be student members of BOA – and other members of BOA were invited to join them on stage to witness this special event. 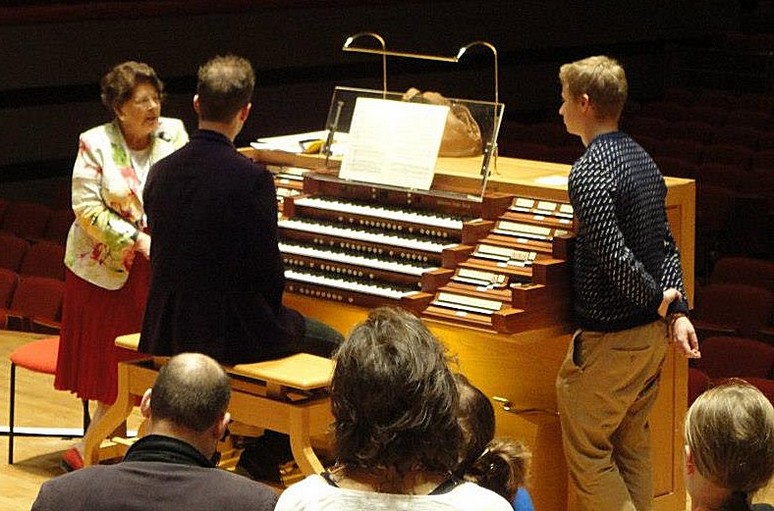 About twenty BOA members were able to take advantage of this Tuesday morning treat.  We began by listening to Will Drakett playing Duruflé’s Prélude et fugue sur le nom d’Alain.  The two-hour event continued with works by Bach (Allein Gott trio from the "18") played by Jonathan Stamp, Buxtehude (Toccata in F) played by Rebecca Kirkman, and finally by Alain himself (Deuxième Fantaisie) played by Hannah Gibson.  While the opportunity to receive advice on interpretation and technique from so distinguished a teacher & performer was obviously valuable for the students, the "audience" of invited guests was no less privileged.  For not only were many of Dame Gillian’s remarks pertinent to helping us with our playing, but we were also able to enjoy the music created so fluently by the students on the famous Klais organ, marvel at their ability to instantly modify their performance in response to her advice, and appreciate the genial manner in which she conducted the whole event.

We were also invited to a coffee reception afterwards, during which several members had the opportunity to chat with Dame Gillian.  So we are especially grateful to THSH staff for involving us in the event and to John Stormont for his liaison with them, to Birmingham Conservatoire Organ Studies staff & students for their preparation & performances, and (of course) to Dame Gillian for making it such a memorable occasion.